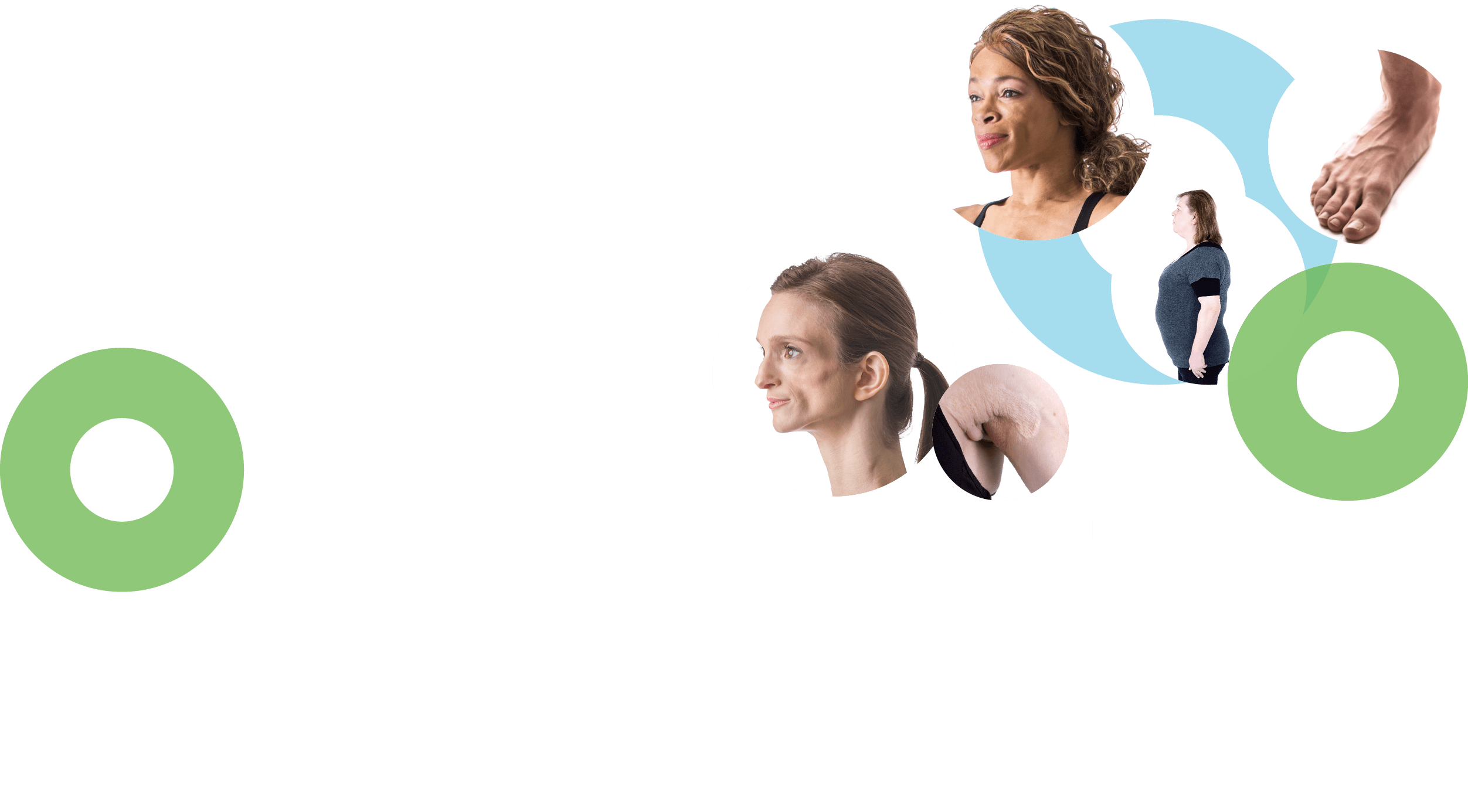 Lipodystrophy has a core characteristic of complete or partial loss of adipose tissue and can affect men and women differently according to its subtype. Characteristic signs and symptoms can be apparent either from birth or early childhood in case of congenital generalised lipodystrophy (CGL) or can occur during puberty in the familial partial form (FPLD). However, the distinct appearance of generalised and partial lipodystrophy and metabolic comorbidities can lead to a suspected diagnosis. 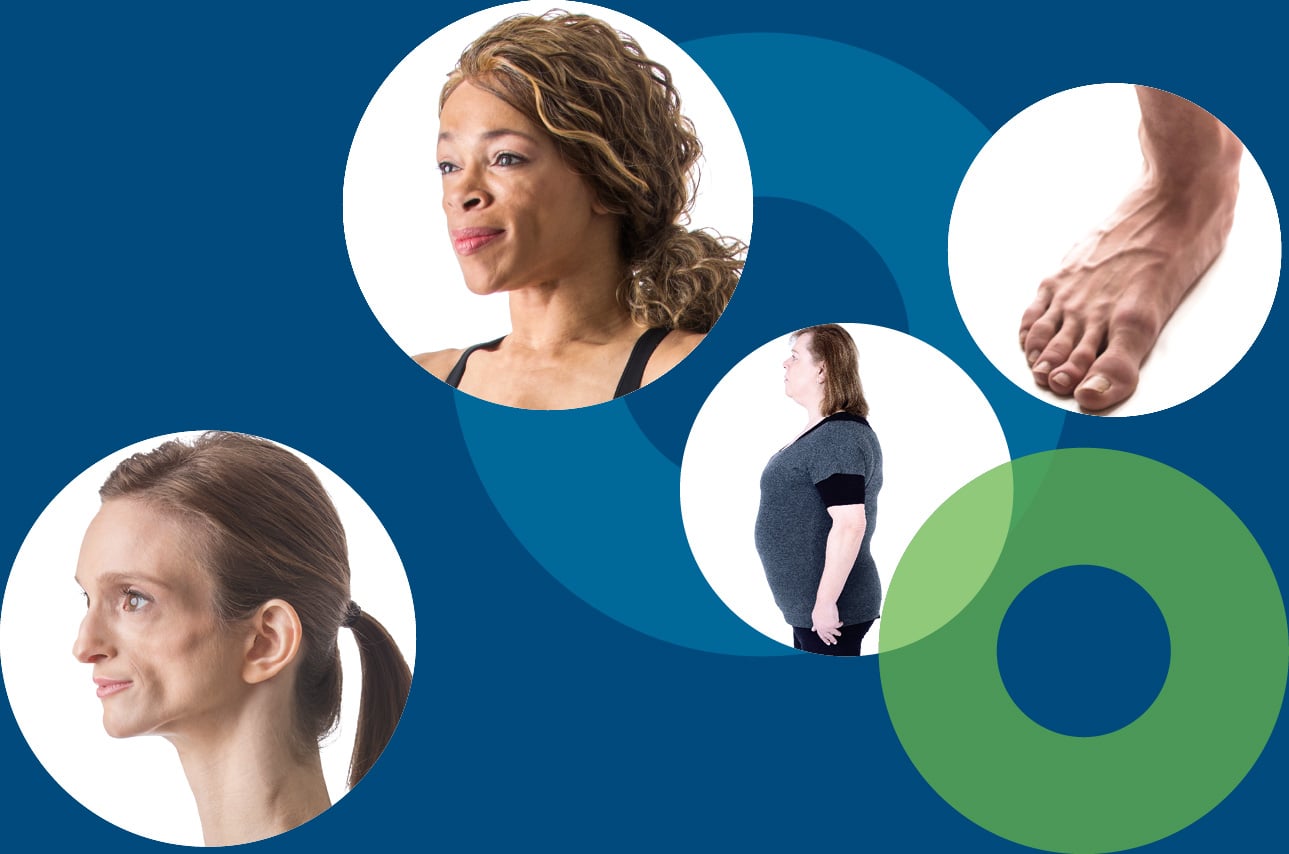 Generalised and partial lipodystrophy are considered to be diseases with many faces. The different subtypes have core, as well as supportive characteristics which increase suspicion of the disease. The essential clinical abnormalities are summarised in an international practice guideline1 that was developed in cooperation with various international medical associations:

Lipodystrophy patients have a total or partial loss of adipose tissue and, as a consequence, lack the hormone leptin, which is produced by adipocytes. This leptin deficiency usually causes high blood lipid levels and insulin resistance that may lead to hard to treat diabetes. Patients may further exhibit hormone imbalances, fertility problems, insatiable hunger/hyperphagia, and liver disease due to fat accumulation.

Besides loss of subcutaneous adipose tissue as the characteristic sign of partial and generalised lipodystrophy, there are some other physical findings which support a possible diagnosis of lipodystrophy.

Although subcutaneous adipose tissue loss is a core characteristic, it may not be immediately obvious especially in familial partial lipodystrophy. The fat loss on the arms and legs may be hidden in a clothed patient and there may be fat accumulation in the face and neck, particularly in women. The ectopic, intra-abdominal fat deposits with a corresponding increase in abdominal girth and fat accumulation in the face and neck can lead to Cushingoid or obese appearance.

In the acquired form of partial lipodystrophy, loss of adipose tissue is mostly gradual, starting at the head and progressing down to the upper abdomen. There can, however, be fat accumulation in the areas of the buttocks, hips and lower extremities. The typical “saddlebags” appearance develops.

Pay attention to patients with unusual fat distribution and a Cushingoid appearance: they could have partial lipodystrophy!

Hyperphagia caused by leptin deficiency can lead to an increased intake of calories, which further exacerbates metabolic complications such as diabetes.

In children, the prevalence of diabetes varies, depending on the subtype, between 48 % and 70 %.

Hypertriglyceridaemia at levels that can precipitate recurrent acute pancreatitis.

Hepatomegaly caused by the hepatic steatosis is frequently found. This can develop into steatohepatitis, liver cirrhosis or even liver failure and can further lead to the development of gastrointestinal haemorrhage or hepatocellular carcinoma.

In clinical trials 55 % of patients with generalised lipodystrophy have cardiomyopathy.

Burden of the disease

According to a recent study on the burden of illness associated with lipodystrophy, patients with generalised and partial lipodystrophy can exhibit different metabolic complications, physical characteristics and laboratory values. To see more detail on the high disease burden in non-treated lipodystrophy patients please click the icon on the left.

Study objectives
To describe in patients with non HIV related GL and PL who have never received leptin or other lipodystrophy-specific therapies:

Design & patients
Retrospective patient medical chart review from 5 leading treatment centres in the United States, Turkey and Brazil covering 230 specific lipodystrophy-treatment naive patients (GL = 81, PL = 149) with a diagnosis of lipodystrophy before Jan 2015. Data extracted from patient charts included complications and comorbidities and lab values as reported. Data is not available for all patients on each characteristic. Mean follow up period from diagnosis: GL = 9.5 years, PL = 6.5 years.

*In women of childbearing potential